What do you think when you’re flying home, cruising at 30,000 feet and the drinks have just been served?

Our engineers think about the ripple in the glass. That ripple signals vibration and is an indication that the engine may be in need of a balance.

The MTII’s PBS-4100+ Series Turbine Vibration Analyzer/Balancing System was developed to ensure that Turbine engines run as efficiently as possible. Excessive vibration is detrimental for a host of reasons:

Direct mechanical coupling of vibration damages structures and bearings within the engine. Acoustic coupling further shortens the life of the engine and the airframe alike.

The PBS-4100+ has been designed as two different models. A lightweight system (PBS-4100+) to be used on the ground for installed engine and a test cell version (PBS-4100R+) intended for use in a production or overhaul facility. The principal of operation of both systems are identical.

A modern turbine engine will typically contain 2-3 concentric shafts containing compressors, fans, and turbines. These shafts are often referred-to as “spools”. In most instances, each spool is aerodynamically coupled; meaning each spool turns at rate that is variable to its fellow spool. Consequently, each spool contains a speed pick-up or “tachometer” so that the rotational velocity and the spool rotational angle can be known. In addition, vibration sensors are affixed to one or more positions on the engine case measuring the magnitude of the physical shaking. Hence speed and vibration may be measured on the engine as it operates. The PBS-4100+ employs a series of on-board digitizers to measure the magnitude of the vibration and each spools’ rotational speed. Advanced logic is integrated to assess the 12-o’clock position of each engine spool to understand where on the spool an imbalance might be located. Vibration is correlated to the spools using a series of configurable “tracking filters”. A “tracking filter” is a series of specialized computer algorithms, which measure the rotational speed of a given spool, then filter the vibration content outside of a narrow band of interest. The narrow band of interest is the characteristic frequency of vibration around each spool’s rotational speed.

Using the tracking filter for each speed, the contribution of vibration of each spool is separated. As vibration varies with engine speed, measurements are “trended”.

In testing an engine, the operator will execute a vibration survey on the turbine engine. The survey is a slow cycling of engine speed from idle to maximum, then back down to idle again. As this occurs, the PBS-4100+ will measure the vibration contribution from each of the spools and plot its findings on a series of plots (most notably, a “Speed versus Vibration” plot. In addition, the overall vibration is also plotted.

Should pre-defined limits of vibration be exceeded, the operator is warned. By the conclusion of the vibration survey, the vibration profile is summarized for comparison against the OEM recommendations. If the vibration of any given spool exceeds an allowable limit, it is possible to add offset weights to bring the spool into balance, similar to the addition of lead weights by an auto mechanic onto an imbalanced tire.

Because the vibration magnitude and the angular position are known on the spool; a solution may be calculated with a variety of techniques using the highly-evolved algorithms within the PBS-4100+. Such a solution would add one or more precisely defined weights onto designated locations/angular positions on the spool.

The elegance of the PBS-4100+ series is the concealment of the science behind a simple user interface. The end-user is asked to identify the engine type and any traceability information (ID number, etc). The PBS-4100+ then retrieves the operating characteristics and the setup of the engine and provides guidance to the operator to execute an engine vibration survey. Subsequently, the reports are furnished to the operator, together with a balance solution, as needed.

Now with a finely tuned engine, please sit back and enjoy the flight. Your ground crews have you covered with MTII’s PBS4100+. 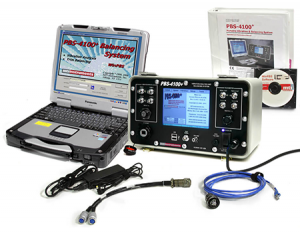 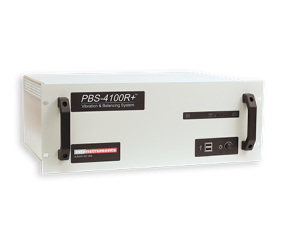