Capacitive sensors can be divided into two categories based upon their performance and intended use. High resolution sensors are typically used in displacement and position monitoring applications where high accuracy, stability and low temperature drift are required. Quite frequently these sensors are used in process monitoring and closed-loop feedback control systems. Proximity type capacitive sensors are much less expensive and are typically used to detect the presence of a part or used in counting applications.

General positioning is probably the most common application for capacitive sensors. As mentioned about, the output of a capacitance sensor is proportional to the distance to the target. If the probe remains stationary any capacitance change detected by the amplifier is directly related to the target position. Their highly linear response and low output phase shift making them ideally suited to be applied in both static and active feedback positioning applications.

Other typical position applications include:

Non-contact sensors are ideal for measuring moving targets because they have high frequency response and do not dampen target motions by adding mass. Typical capacitive sensing systems have bandwidths exceeding 20 kHz, making them ideal for high speed applications such as:

Thickness quality control monitoring is better applied on line during the manufacturing process instead of periodic sampling after a product has been manufactured. This way process adjustments can be made “on the fly”, reducing or eliminating the production of product that does not meet specification. In some applications, contact methods can be utilized, however, they are slow, can damage the product and are subject to wear. Non-contact sensors are commonly used in these applications.

This is a typical thickness setup with A and B representing the sensor outputs. The gap between the probes, G, is equal to A + B + T. If an initial sample of known thickness, T, is placed within the gap, G can be determined and used in future calculations. Since thickness = G – (A + B), and G is constant, the thickness can be calculated by simply subtracting the two outputs. Single sided thickness measurements can also be successfully made using capacitive sensors if the back side of the material being measured can be referenced to some fixed plane. The product thickness is directly proportional to the gap between the probe and the surface of the material.

Although MTII’s systems are primarily used to make non-contact measurements of position, displacement and vibration, they can also be used to measure the thickness of dielectric materials. When making these types of measurements a fixed gap is established between the probe face and a grounded plate. If an insulating material is inserted in this gap the capacitance will change even if the distance between the probe face and the grounded plane remains constant. This change will create a change in the voltage output of the amplifier proportional to the dielectric thickness. Once a sensitivity factor is determined based upon the specific material being measured it is important that subsequent measurement samples have the same dielectric properties for accurate results. Several methods can be used to determine dielectric thickness as follows:

When dielectric constant of material to be measured is known:

If an Accumeasure amplifier and capacitance probe are set up at any air gap within the operating range of the system the Thickness Sensitivity Factor for a material having a particular dielectric constant can be calculated as follows:

Therefore, if a new sample of unknown thickness and same dielectric constant were introduced into the gap the thickness can be calculated as follows:

For example, if the output voltage with the test sample in place reads 6.50 volts, then:

If the dielectric constant is unknown or uncertain it can be measured with a capacitance system by placing a sample of the material in the operating gap and adjusting the probe until it just touches the sample. This will fill the gap between the probe and ground plane with only the material being measured. A reading of the output voltage is taken and the material carefully removed without changing the gap setting. The reading of the output voltage is taken again without the material in the gap. The dielectric constant can be calculated as follows:

After the dielectric constant is known Method A can be used to measure additional samples of the same material.

Dielectric materials are those materials which behave more like insulators than conductors. The following is a list of dielectric constant for some common plastics, rubber, glasses and liquids: 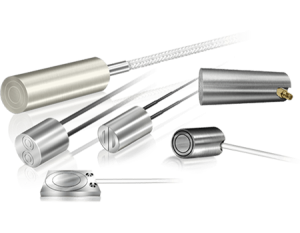 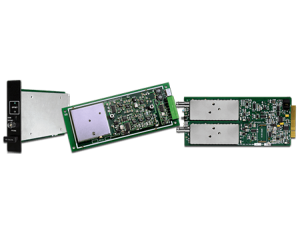 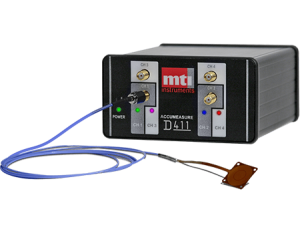 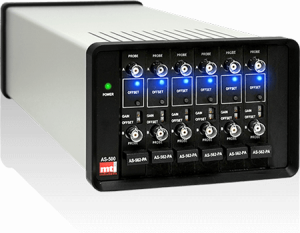 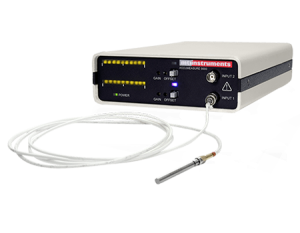