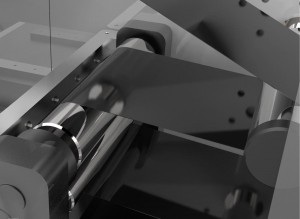 In the semiconductor industry, thin films are deposited onto silicon and other wafer materials one atomic layer at a time. The thickness of these extremely thin coatings is important because thin-film thickness affects the wafer’s electrical, optical, and mechanical properties. With semiconductors, either conductive metallic films or non-conductive metal oxide films are deposited. There are two main thin-film coating methods, chemical vapor deposition (CVD) and physical vapor deposition (PVD), both of which use a variety of processes.

Because the coatings for semiconductor wafers are so thin, thickness measurement require a high degree of accuracy and precision. However, thickness variability tends to be high. If an inspection fails to detect variances in thickness, a coated wafer may undergo further processing, which increases manufacturing waste. Different thickness-gauging methods can be used, but capacitance-based measurement offers several advantages. These include the ability to measure non-conductive thin-films, simpler sample setups, in-situ measurements, and non-destructive testing and speed of wafer processing (up to 20 per hr). 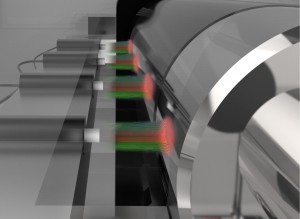 Capacitance is the ratio of the change in an electric charge to the corresponding change in its electrical potential (i.e., voltage). With parallel plate technology, a

probe is used as one of the plates and a grounded target as the other. The capacitance that’s formed between the probe and the target varies as a function of the distance (gap) between these two surfaces. An amplifier converts the capacitance of the gap into an output voltage that’s proportional to the gap. Non-conductive thin film coatings are very hard to measure, but capacitance can measure them with both precision and accuracy – and at a sub-micron level.

Unlike other thickness-gauging methods, capacitance doesn’t require contact between a probe and a target. There’s no mechanical loading, probe or target wear, or target distortion. Capacitive probes also cost significantly less than laser interferometers but can match or exceed these more expensive devices in terms of stability and performance. Capacitive probes also work in very strong magnetic fields and under vacuum conditions. Importantly, capacitive measurement is a non-destructive technique that can be performed in-situ, therefore is optimal when high volume material testing is needed.

Destructive techniques for thin-film thickness measurement include mechanical cross-sectioning, ion beam cross-sectioning, angle lapping, Calo testing, and TEM lamella preparation. Whether the process cuts a sample in half or removes just a small portion of the surface layer, the coating (if not the entire sample) is altered. Even if the process is only locally destructive, there are multiple steps (such as cutting, embedding, and lapping), which complicates sample preparation. Plus, because destructive techniques do not support in-situ measurement, microscopy and microscopic analysis must be used. 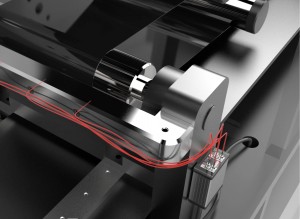 MTI Instruments provides non-contact, capacitance-based solutions that can measure thin-film thickness with ease and precision. For example, the Proforma 300iSA is a desktop, semi-automated metrology system with full surface scanning capabilities for three-dimensional wafer imaging. Its comparison function supports thickness measurements before and after deposition to determine thin-film thickness across the entire surface of the wafer. For both conductive metallic films and non-conductive metal oxide films, the Proforma 300iSA can be used with 3, 6, 8, or 12-inch wafers with a 1000 µm thickness range. This application note describes thickness measurements with 10 µm films.

For factory measurements rather than desktop measurements, MTI’s Accumeasure series capacitance sensors provide a high level of stability, repeatability, and accuracy. During the build-up of metal oxide film, a capacitance probe within the deposition chamber can measure the thickness of the dielectric material by detecting the impedance change and using a co-located ground electrode. The amplifier in this Accumeasure system is located outside of the chamber and converts a highly reliable capacitive electric field measurement into a highly precise 24-bit digital reading. Digital Accumeasure technology can also be used with in-situ measurement of conductive films.

The semiconductor industry can use various methods to measure the thickness of extremely thin-film, but MTI Instruments’ market proven capacitance-based solutions provide a non-contact, non-destructive way to measure both conductive and non-conductive coatings with precision and accuracy. MTI’s Proforma 300iSA and Digital Accumeasure simplify sample preparation and measurement, reducing projects costs and timetables. The detectable thickness ranges and data processing capabilities of these systems are also important to consider when evaluating precision measurement solutions for thin-film thickness.

Ask MTI Instruments for more information about the Proforma 300iSA and Accumeasure technology.

The Growing Need for Industry 4.0 Testing and Validation Tools

How Aviation MROs Can Maximize Labor Efficiency and Asset Uptime