Chemical mechanical polishing (CMP) uses chemical oxidation and mechanical abrasion to selectively remove material from semiconductor wafers in order to achieve very high levels of planarity. The planarity, or flatness, of these wafers is important for optical lithography, a microfabrication technique that produces integrated circuits (ICs) by transferring a geometric pattern from a photomask to a light-sensitive chemical photoresist. Also known as photolithography or UV lithography, optical lithography can produce a geometric pattern on a thin film or directly onto the substrate. 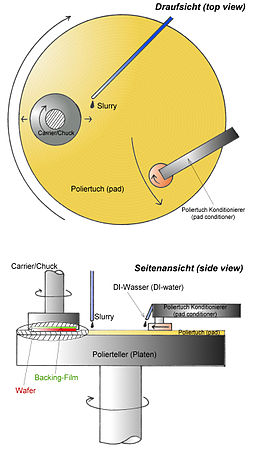 During optical lithography, variations in wafer flatness must be smaller than the exposure tool’s depth of focus over the illuminated region of the wafer’s top surface plus the thin film (if any). Otherwise, defective IC patterns and resultant manufacturing waste may occur. To ensure that a wafer’s top physical surface is planar and within the lithography system’s specifications, semiconductor manufacturers need to measure thickness, total thickness variation (TTV), bow and warp. Moreover, these measurements need to be made with a high degree of accuracy and precision.

Thickness and TTV are measured in microns or mils (thousandths of an inch). TTV is the difference between the maximum and minimum values of thickness during scanning or a series of point measurements. Because bow is measured only at the center’s wafer point, a three-point reference plane about the edge of the wafer is calculated. Bow is then determined by measuring the location of the median surface at the center of wafer and determining its distance from the center plane. By looking at the entire wafer, warp provides a useful measurement of the true wafer shape.

Global flatness, a measure of variation relative to a whole-wafer plane, is also important because chemical mechanical polishing or planarization can cause greater thinning at the edges of the wafer than at the center. Generally, non-contact measurement is used to avoid contaminating or applying pressure to the polished wafers. Capacitance-based systems cost less than laser interferometers and can make fast, accurate measurements of both flatness and wafer shape. Capacitive sensing can also support quality checks earlier in the manufacturing process and integration with in-process measurement systems.

MTI Instruments of Albany, New York (USA) makes non-contact capacitive measurement systems that locate the polished semiconductor wafer between two probes. These probes contain highly accurate capacitance sensors and are used with an amplifier that is characterized by high precision and high linearity. The distance between the capacitance probes is known, and the gap between the wafer and the probes is obtained from the capacitance at each measurement point. MTI’s portfolio  of products includes the Proforma 300i, the Proforma 300iSA, the Digital Accumeasure, and the Accumeasure HD. 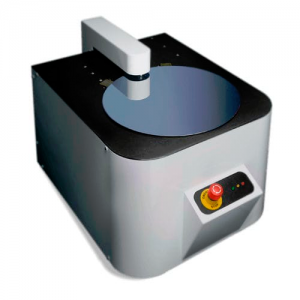 MTI Instruments also offers the Digital Accumeasure, which can be used to build custom wafer metrology systems for original equipment manufacturers (OEMs). The Accumeasure D, as this product is also known, has a sub-micron resolution and converts a highly-reliable capacitive electric field measurement into a highly-precise 24-bit digital reading. The Accumeasure HD has picometer resolution and, according to independent research, is proven to be the world’s highest resolution capacitance system.