Measuring glass substrate thickness with a Proforma 300i 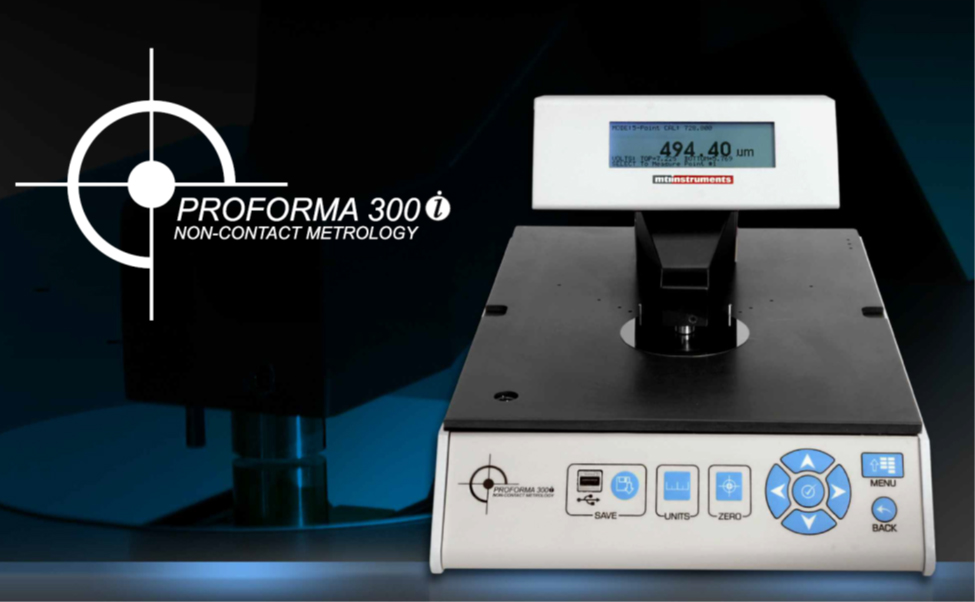 An applications experiment was made with the MTI Proforma 300i Semiconductor thickness system to determine if it’s useful to measure glass substrate thicknesses typically found as support structures for Si semiconductors that are used for fabricating MEMs components and other thin Si wafers. The MEMs Silicon wafer is so thin after grinding that it needs the support of a thicker substrate to prevent breakage of the wafer during the back grinding/thinning process. To measure the thickness of the thinned Si wafer it’s necessary to measure the glass substrate so that thickness can be subtracted from the total thickness of the Si plus glass substrate.

Ordinarily, the Proforma 300i capacitance probes only conduct the electric field to the surface of a conductive wafer and the field does not pass through the wafer. It’s also possible to measure glass substrate thickness or other non-conductive materials with capacitive probes. This is because the probe’s electric field can pass through the glass and the permittivity of the material then affects the attenuation of the field. The attenuation is then directly proportional to the thickness of the permittivity material. The Proforma 300i uses MTI’s proprietary push-pull probes and it is necessary to configure the probes such that the probe active faces are 180 degrees out of phase with each other so that the field is conducted through the glass properly. 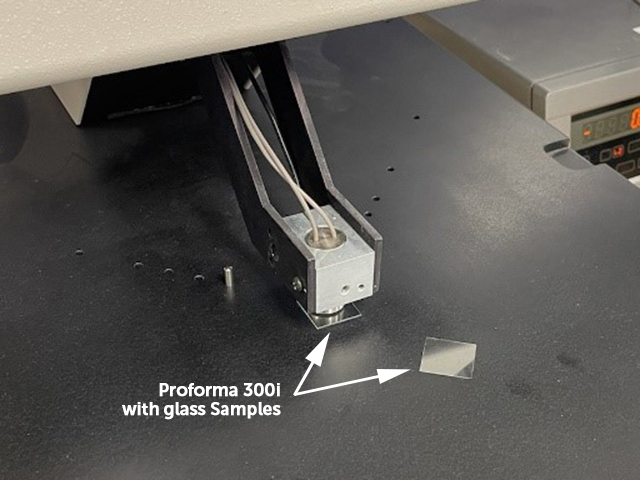 To simulate variable thickness of glass we stacked thin borosilicate microscope glass slide covers and observed the PF300i readings vs the known stack thickness. We then looked at the mathematical correlation of the PF300i measurement of the glass substrate vs the known glass thickness and plotted the results.

The Proforma 300i used in this experiment was calibrated with gauge blocks that have an accuracy < 0.25 µm. The slope and calibration factor of the Proforma 300i was not changed or altered for use with the glass. Instead, we want to determine what the correction factor would be if using the same setup to measure glass thickness.

A plot of the results stacking glass cover slides in Proforma 300i
Typical diaelctric constant is 4.6

Fig 1. Data was taken and a plot was made of the actual thickness versus the Proforma300i reading.
Note: Air spaces between the glass do not affect the overall thickness readings. Only the actual permittivity of the glass slides affects the readings.

Fig 2. The horizontal axis is the thickness in µm, the vertical axis is % error FSR.

Conclusion: The linearity plot indicates that when measuring glass, the Proforma 300i thickness readings can be mathematically corrected using the correction factor given in Fig 1.  (Measured thickness x 1.1158 + 38.994 µm) from 200µm to 1.2 mm with a max error of +0.83%, – 0 %. If the measuring range is restricted to 500 µm ±200µm then the max error is more like + 0.15 %, – 0%. This also assumes that the glass being measured has a similar dielectric constant compared to borosilicate glass (ε= 4.6) if you know the dielectric constant of the glass (not borosilicate) you are using, the equation can be linearly corrected by the difference.

Data taken to support the plots

The Proforma 300i Brochure